Today is the type of day I love in physics.  My students knew they were going to be pressed for time today, so yesterday I told them they could get started as soon as they arrived to the physics room.  We have eight minute passing time, and in each of the classes, the majority of the students were already working in their groups before the bell even rang…. LOVE IT!

As promised, here is a picture of the free fall timer. 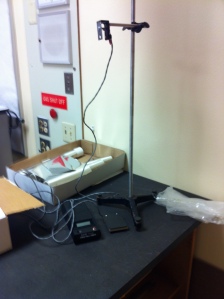 We even had time at the end of the hour to have a quick post-lab discussion.  We looked at our data (the acceleration value and the mass of the object dropped) and calculated a class average, then compared it to the commonly accepted value.   I then showed the students the video analysis of a lacrosse ball dropped from our electromagnet (it is a few years old) but I was able to get data for the bounce.  Here is a screen capture of it:

Notice the value of the acceleration as the ball travels UP… that’s right ~-9.88m/s/s !!  This definitely surprised a few of the students.  I then related this back to our phan cart that was setup to do a U-turn…. same graphs, then the phan cart when I pushed it up an incline and allowed it to roll back down; this then becomes the steepest possible ramp… just like we discussed in the pre-lab yesterday, but now going ‘up the ramp and down’ rather than just ‘down’.  I love it when I can come full circle with an experiment or concept.

I closed by re-enforcing the idea that all the representations … graphs and kinematic equations apply to free fall, we just know the value of the acceleration.

My class is offered for CAPP credit.  The students taking the course for this credit completed a different experiment.  They used two photogates to gather acceleration data as a function of the angle of the ramp, like Galileo.  The 24 students worked in groups and will pool the data in a google spreadsheet.  They will plot it with Logger Pro, then extrapolate the data to ramp angle of 90 degrees.

Tomorrow we WB the constant acceleration problems, I think I have a pretty cool idea for that, but that will wait until tomorrow’s post.

Today was the last day for our optics unit.  The student took the summative test on mirrors.