Tomorrow will be all WB’ing.

Today we reviewed a bit about drawing force diagrams with components.  So far, we had only worked on tension forces that had components.  Today we extended this to when we have an object on an incline.  Years ago at a Phox Share meeting, Dale Basler shared a demo using the Vernier WDSS to show the force diagram for an object on an incline.  The file is set-up with animated vectors to show the gravitational force, the normal force and a tension force, but they are really the accelerations in those directions.  It is really slick and does an excellent job of showing the kids how the forces (size and magnitude) change (or not in the case of the gravitational force) as the incline is increased.  Here is a clip of it in action.

Today the students took an assessment on drawing circular motion force diagrams.  Here is what I gave them:

Here is the experimental set-up being used: 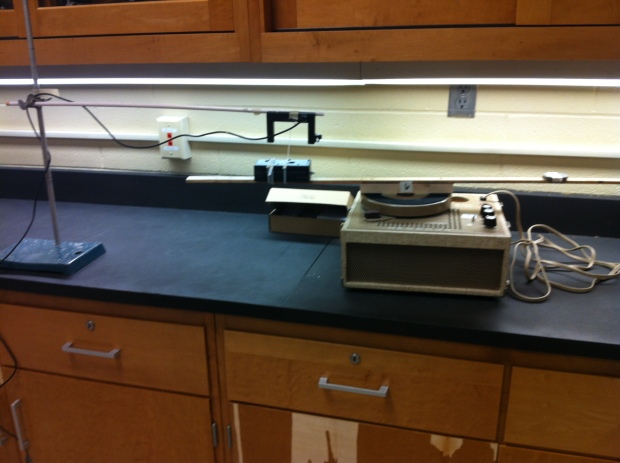 That’s a Vernier WDSS zip-tied to a meter stick on our record players.  The tangential velocity will be measured using a Vernier Photo gate and One-Gate timing.  The students will do the experiment twice… a small radius and a larger one.  We did not get finished, so more data collection later.  Here is a screen shot on my own data: