As I explained in the last post, today was all about gathering data for the impulse-momentum experiment.  Here are two short video clips that show how we set-up the equipment:

We started with a velocity of zero, so no kinetic energy.  Then I said I gave the cart a velocity , v  and that gave us 2 ‘blocks’ of energy.  Form there, we went to a velocity of 2v, then 3v,  and so on.  I really like how the non-linear nature shows up using these blocks.

Today we used the graph of elastic energy as a function of change in length to develop the equation for elastic energy.  To help drive home the shape of the graph and the square relationship, I used the energy block again.  Here is a picture of  what we did:

We also developed the relationship we use for dissipated energy (Ediss =Ff*d(diss)) using this set-up: 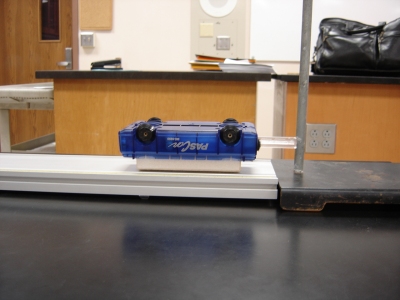 The students did not complete this experiment, I walked them through it.  We just made use of COE (elastic energy stored when it is compressed is equal to the energy dissipated).  We determine the elastic energy using the spring constant and how mush the spring is compressed as it is pushed against the ring stand.  The energy was plotted as a function of the distance over which the energy is dissipated.  The graph is linear and the slope is approximately the frictional force.  Tomorrow the students will start in on kinetic or gravitational.

Today we had the post lab discussion from the Modified Atwood machine experiment that develops Newton’s Second Law.  To provide the kinesthetic experience (and so the students can internalize N2L), I used a ‘Giant Lab Cart of Physics’ (aka a delivery cart). We kept a constant force (one student pushing) but increased the mass of the system (more students riding) and also increased the net force (more students pushing).   Tomorrow we will use the giant hover craft of physics to connect all three of Newton’s Laws.