I started the hour by sharing the results of the student survey my students completed yesterday.  I think it is important for the students to be able to see the results and especially the comments.  If provides a chance for even more dialogue.

As I  explained yesterday, we started a radial acceleration and force sample problem with the toy airplane. Radial Acceleration Sample 2 is our work from one of the sections: (You’ll notice I worked through it using the ‘Work Backwards’ approach.  This is a hugely powerful problem solving approach for students.)

Here is how I checked the answer using a Vernier laser gate and the Strobe file in Logger Pro.

Here is a screen shot of the file: 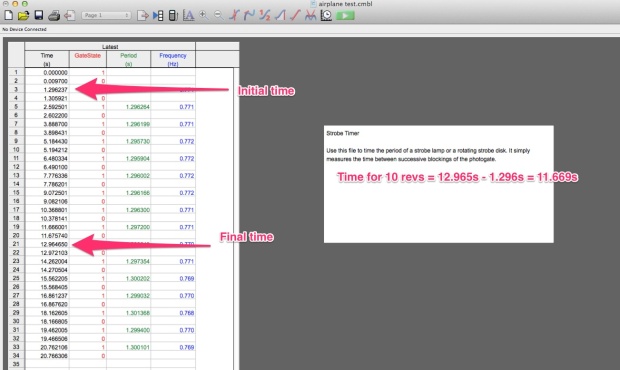 After looking through some of the formative assessment ‘colors’ and comments, I decided to add a day of practice.  To help review and extend the idea of component of a vector I used the pHet simulation called Vectors, here it is. I like this because you can display the components as projections on the x and y axis.  After that there was an additional practice sheet.  The fourth mod class simply worked through it in small groups while I circulated and provided some small group(s) instruction.  With the 7th mod class I played the Mistake game for the first time… I made a few mistakes with it.  I had two groups do the same problems.. a bad idea because as the rest of the class tries to determine the mistake, invariably the correct answer gets discussed.  This is a good thing except when there is another group that has tried to include a subtle mistake in the force diagram yet to be presented.  Another mistake was to not limit the guesses that could be made. I had attempted to make the game into a chance to earn some candy (Smarties) if no one determined the mistake, or if it was determined.  I also handed out Dum-Dums if there was a mistake made that was not intentional.. really interesting that these showed up in the discussion and the presenting group claiming “no that is not a mistake”.