We WB’ed the gravitational force experiment results.  As part of the discussion, we realize the slope of the linear graph is not equal to 1.0.  Many of the students were probably thinking, big deal… but it is.  It shows that weight is not equal to mass; they are completely different quantities and can not be used as synonyms.  All of you know the slope of the linear graph turns out to be 9.8N/kg for all three substances.  I tie this back to what is really giving the substance its mass, protons, and neutrons (I’m waiting for a student to say Higgs Boson…). Like many modelers, I define this as the ‘gravitational field strength for the earth’.  This naturally leads to the gravitational field strength for other massive objects like the moon. If we did the experiment on the moon that value changes, but not the number of protons and neutrons in the sample… so mass is constant.

We also worked through a sample tension for problem that allowed them to see how we use Fg and the net force equations we have been writing as part of our force diagrams.  Here is the problem: 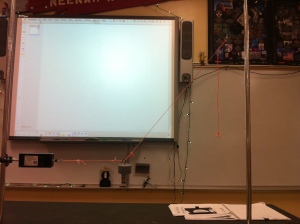 We decided that we would allow the kids to work through a practice sheet on solving ca problems with the kinematic equations.  It was the same 5 problems they had solved graphically… again, they already know the correct answers and it allows them to see which method they prefer.  I usually dislike this type of lesson plan, but one student this is an awesome thing to do, just let the pound some problems and ask questions when they have them.